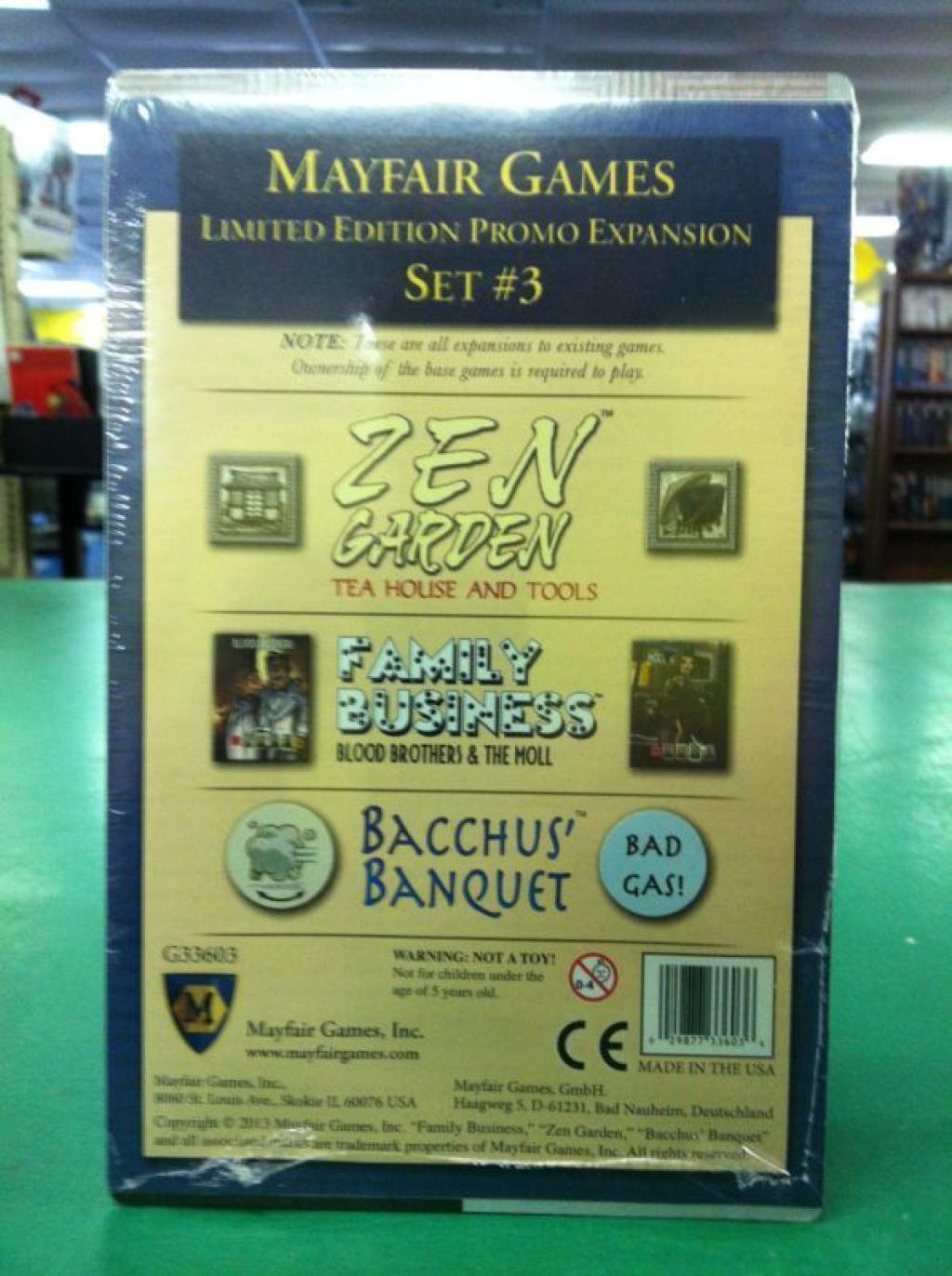 The Mayfair Games Limited Edition Promo Expansion Set #3 is composed of 3 expansions: Bacchus' Banquet: Bad Gas If you are given poison, you may choose to flip the bad gas token. If the token lands blank side up, there is no effect, and play proceeds as usual. If it lands bad gas side up, immediately move your belt down one notch. Additionally, neighboring players might be affected by your gas. The player to your left and the player to your right must check to see if they are affected! They each flip the bad gas token. If their flip lands gas side up, then they are forced to purge and immediately move their belt down one notch. If both your left and right neighbors purged, you are sickened by their acts and must move your belt up by the same number of spaces as the poison you originally received. Family Business: Blood Brothers and The Moll Expansions If you currently control the weakest mob (fewest surviving members), you may take the Blood Brothers tile and place it Blood Brothers side up in front of you. Blood Brothers: Whenever one of your mobsters is added to the Hit List, you must move one mobster already on the Hit List to the space directly in front of your just-added mobster (effectively making them a higher priority on the Hit List). The mobster you move can be one of yours, or an opponent's. If there are no other mobsters on the Hit List then ignore the effect. When you activate Blood Brothers you must make a choice: either keep the tile Blood Brothers side up, or turn it over to The Moll side. The Moll: Whenever one of your mobsters is added to the Hit List, you may take a mobster that is controlled by the player that put you on the Hit List and place it on the Hit List in the space behind your just-added mobster. When you activate The Moll, you must flip the tile back over to the Blood Brothers side. When your mob is no longer the weakest in play, or you are eliminated, you must give the tile to the player with the weakest mob. If there is ever a tie, nobody may control the tile until one player has the weakest mob. When there are only three players left in the game, this tile is taken out of play and is returned to the box. Zen Garden: Tea House and Tools Each player begins the game with a Tea House and Tools tile. The tile is placed using the same rules as a lantern tile. However, when you place it, you have a choice which side you want to place face up: Tea House or Tools. A tea house is treated much like a lantern: it is wild, and it can still be a part of a pattern. However, it cannot be replaced like a lantern. A tools tile can be replaced exactly like a lantern. However, it is a part of NO landscapes. It cannot be a part of any pattern.